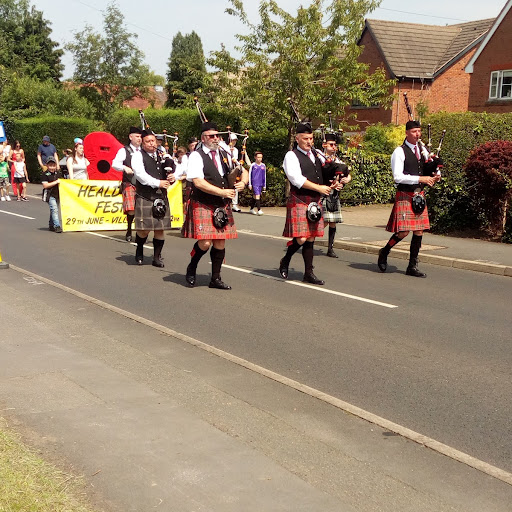 Heald Green Village Festival  took place on the hottest day of the year, so far, at the end of 30 June and people came out in their thousands to enjoy a real Village Event, which started with a Fancy Dress parade  for the children around the local streets. This was led by the Phoenix Pipe Band and was enjoyed by everyone.

With over 50 community and charity stalls to wander round as well as other attractions, from the funfair, donkeys, model train, body zorbing and  entertainment, there was plenty for all the family to enjoy.  The varied entertainment in the hall was accompanied by lovely refreshments from the team from St Catherine’s, whilst outside the food from Cheadle Muslim Association and from Nixon’s BBQ was much appreciated as usual.  Heald Green Ratepayers’ Tombola stall raised over £360 which goes towards funding the Festival next year. The small Rainbow Train, which Nixon’s Farm generously loaned to us, was a real treat for little ones to ride around the huge field.

The Festival Junior Football Tournament was won by Cheadle Catholic Junior School with Etchells Primary as runners-up, with all winners and runners-up receiving medals. The Mayor of Stockport presented the new Ged McAndry Trophy to the winners. The winners of the Grand Draw were also announced at 4pm and winning numbers displayed at Cafe Unity later. Congratulations to the winners and thanks to the donors of the great prizes.

The annual Festival is a great way to bring the community together and it would be a pity if it couldn’t continue because of lack of helpers. The Committee are desperate to recruit more people to help. Please give it a go! Margaret, 437 7197, will give you further information.